BEIJING (AP)—Outplayed and undermanned for most of the night, the Americans got the only shot they needed.

Carli Lloyd scored in the sixth minute of overtime Thursday night, Hope Solo bailed out her teammates time and again, and the United States beat Brazil 1-0 to win the gold medal in women’s soccer for a third time in four Olympics. As the final whistle sounded, the Americans charged across the field, hugging anyone in sight. Someone handed out flags, and several players took off, running.

The Brazilians, meanwhile, were disconsolate. Goalkeeper Barbara lay on her back, sobbing, while Cristiane sat on the ground crying. Marta, who had been so brilliant all night only to see her team come up short yet again in a major tournament, put her hand to her head.

Solo, who only 11 months ago was banished from the bronze medal game at the World Cup for criticizing then-coach Greg Ryan for not playing her against Brazil, danced on the field several minutes after the game ended, a large, imitation gold medal around her neck, a phone to her ear and a bright smile on her face.

The Americans looked sluggish and outclassed against the Brazilians for much of the game. But just as they have all Olympics, they came through when it counted.

Amy Rodriguez held off two Brazilians and put the ball up for Lloyd who gave it a light touch with her right foot and then left-footed it from a yard outside the area. Barbara dived, but the ball scooted past her and settled in the far bottom corner of the net.

Marta gave Brazil a chance in the 102nd minute, but she was tackled by Heather Mitts and then, after getting the ball back, was blocked first by Kate Markgraf and then by Christie Rampone. Brazil peppered the U.S. goal in the final minutes of overtime, but couldn’t connect.

The International Olympic Committee has asked the International Gymnastics Federation to investigate claims that Chinese double gold medalist He Kexin is younger than the eligible age of 16 to compete in the Games. 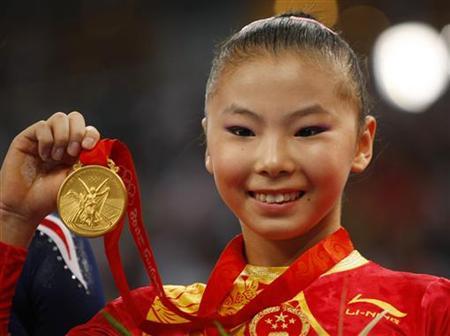 The International Gymnastics Federation has agreed to investigate claims that China fielded underage gymnasts at the Olympics after a request by the International Olympic Committee that it look into the issue.

It is interesting start. What will happen if it will become the truth?

It is interesting start. What will happen if it will become the truth?

“We believe the matter will be put to rest and there’s no question … on the eligibility,” IOC spokeswoman Giselle Davies said. “The information we have received seems satisfactory in terms of the correct documentation – including birth certificates.”